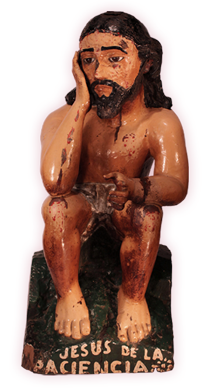 The Guatemalan Saints can be divided in Colonial and Primitive Style Carvings. The age of both styles can be determined by the restorations found, different layers of paint and sometimes by checking the aging wood of the base of the sculpture.

The Colonial Catholic Saints have a classic look; they are easily distinguished by their exquisite and delicate touch as distinctive mark. Many sculptures are articulated, as they were meant to be dressed.

These images have the same quality as the ones found in churches, but are smaller in size; they were commissioned to be in small chapels in private homes.

The images were originally carved by European Masters that established workshops in Antigua Guatemala and developed one of the most acclaimed Carving Clusters of the Latin American Colonial Era.

The Primitive Carvings have the definite Guatemalan Touch. These images were carved by the Believers themselves and were made out of devotion; they will be placed at home altars or kept at the Cofradías (Religious Brotherhoods). Syncretism is perfectly seen when they mix in their home altars Mayan Deities with Catholic Images. The beauty of these Santos lays in their disproportion, multi-colors and naïve elements.